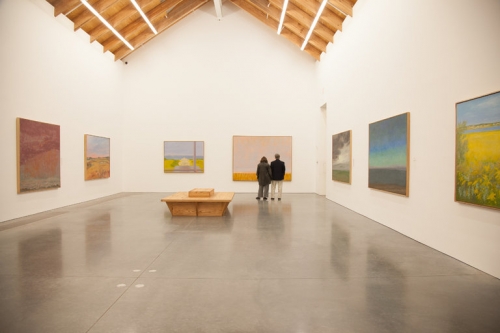 The artists Jane Freilicher and Jane Wilson had a lot in common besides their first names. Both were painters, both worked in the East End of Long Island starting in the late 1950s, both lived at the same address for a time and both died recently at age 90, within five weeks of each other.

But their artistic styles differed, as is evident in “Jane Freilicher and Jane Wilson: Seen and Unseen,” an exhibition at the Parrish Art Museum in Water Mill. Many of the works in the show, including some 40 paintings, depict Long Island and shed light on how the two artists evolved throughout their careers.

Although Freilicher and Wilson briefly flirted with Abstract Expressionism in their early years, both — particularly Freilicher — eventually settled on a more representational style. Freilicher, said Alicia Longwell, chief curator of art and education at the Parrish, was “compelled by what she called ‘the seen’” and “painted the world as it was from specific vantage points,” while Wilson sought to “convey in paint the ‘unseen’ or what she called ’moments of strong sensation.’”

Jane Wilson, left, and Jane Freilicher. Credit John Jonas Gruen
The artists and their husbands — Freilicher’s second husband was Joseph Hazan, a former dancer, amateur painter and clothing manufacturer — shared a house in Water Mill for several summers in the late 1950s, drawn by their friendship with the painter Fairfield Porter, who had moved to Southampton in 1949. Freilicher and Wilson shared a studio in a large, downstairs bedroom.

John Jonas Gruen, Wilson’s husband and a critic and photographer, said the painters “set up their easels” facing each other. “When I went to visit, I could see each lost in her own dreams, doing her own thing, almost oblivious to each other,” he said.

Elizabeth Hazan, Freilicher’s daughter, who is an abstract painter based in New York City, recalled that her family lived four months each year in Water Mill, spending summers and most weekends there. Her parents took her out of school in Manhattan to move there each May, she said.

Ms. Freilicher's "Landscape with Construction Site" (2001). Credit Lindsay Morris for The New York Times
The house and studio had a major impact on Freilicher’s work, Ms. Hazan said, adding that before the four-month stints, Freilicher had painted landscapes from memory.

“There was a big shift when she could look out the window at the land around her. The views were open and clear then, and her work evolved quickly, moving away from abstraction,” Ms. Hazan said. Colors became brighter and Freilicher could capture the local light, her daughter explained.

The Long Island landscapes painted by Wilson, which were often weather-related, depicting the sky and clouds, were painted indoors, in her studio, Mr. Gruen recalled. He said she “internalized” what she saw outdoors, “came back to the studio and painted.”

In a 1987 interview, Freilicher described her friendship with Wilson during their early days in Water Mill. “We spent time together in the same house for a few summers,” she said. “There was some sort of affinity in our painting, but it wasn’t that we influenced each other. Maybe a certain reinforcement.”

Jane Wilson's “End of Winter: Water Mill” (1985). Credit Lindsay Morris for The New York Times
Julia Gruen, Wilson’s daughter, who is the executive director of the Keith Haring Foundation, said her mother’s work was not directly influenced by other Long Island artists of the period, like Larry Rivers, Jasper Johns, Willem de Kooning and Jackson Pollock (in addition to Freilicher and Porter). Rather, this group “created a sense of community, a sense of shared aspirations, of what is possible,” Ms. Gruen said, adding, “There was clearly a struggle that could be shared.”

Besides landscapes, the exhibition includes still lifes — Freilicher’s often of flowers, Wilson’s of foods and artist’s tools — and portraits of these women by Porter and Alex Katz, as well as a portrait of Andy Warhol painted by Wilson in 1960. There are also photographs by Mr. Gruen of the East End artists’ community, including an amusing 1962 image, taken in Water Mill, of the heads of Julia Gruen; John Ashbery, the poet; Freilicher and her husband; and Wilson, all popping up behind a huge wicker sofa. More of Mr. Gruen’s photos have been published in a new book, “Jane Wilson: Photographs by John Jonas Gruen.”

Additional images of Wilson on display were part of a 1957 magazine article chronicling how she worked as a showroom model to support her painting. Called “Portrait of the Artist as a Young Model,” the feature contains photographs of Wilson and her husband, and of Wilson visiting Freilicher in her studio in Hoboken.

Displaying their work together is a special opportunity, Ms. Longwell said.

“Looking at them individually you become aware of their heightened differences — despite the similarities and the fact that they were in the same circles — and how fundamentally different they were as painters,” she added. “Each deserves a major, full-dress retrospective.”